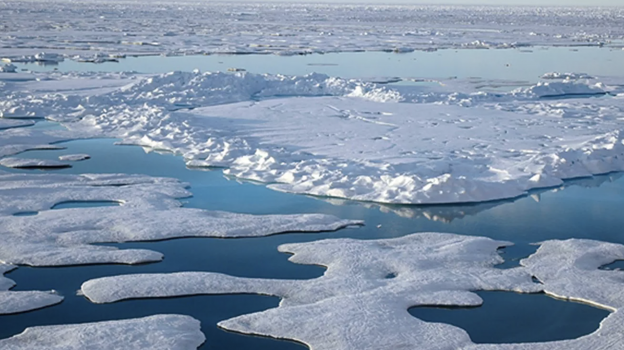 Students observe various forms of water (clouds, Greenland ice sheet, oceans) in a photo of the Earth from space and watch a teacher-led demonstration illustrating the distribution of Earth’s water resources, emphasizing the very small amount of Earth’s water that is fresh water and available to humans and ecosystems.

This activity is an abbreviated version of several related lessons from the National Oceanic and Atmospheric Administration (NOAA) addressing water resources, water use, and water conservation.

● Optional: School can provide a globe.

Ask students to think about the lesson topic by posing questions such as “What are some of the ways that you use water everyday?” and “Where does the water that you use come from?” (from NASA Freshwater Availability classroom activity)

Ask students to make observations and share what they notice with the group (when called upon, in an orderly fashion!). Draw their focus to WATER in the image. What are the blue areas? (Oceans, which are made up of water.)

One of Earth’s nicknames is the “Blue Planet.” Why do you think this is? What makes it the blue planet? (About 70% of Earth’s surface is covered by water, which appears blue.)

But not all water appears blue in this photo. What are the white swirled areas? (Clouds, which contain water droplets or ice particles.) What about the solid white area in the upper right portion of the photo (Snow on the Greenland ice sheet – water in its solid forms.)

Water is one thing that makes the Earth so special among all of the planets. All living things need water to survive. As far as scientists know, water is not present on most planets.

3. Introduction to freshwater as a limited resource

Introduce the idea that even though there is a lot of water on Earth, most of that is salt water that is in the oceans.

It turns out that even though there is a lot of water on Earth, it’s mostly (97%) salt water. The amount of fresh water is only a small portion of the total water on Earth (3%), and that is the only water that people and land-based ecosystems can use.

The demonstration starts with a 5-gallon bucket filled with water. Tell the students that this represents all of the water (100%) on Earth.

Ask students to share ideas about where/in what forms freshwater can be found on Earth. Suggestions might include lakes, rivers, glaciers, snow fields/ice, permafrost, aquifers/underground, as water vapor in the atmosphere/in clouds. Guide them toward identifying polar ice caps/glaciers as containing water in its frozen form.

Focus on the remaining ½ cup of water. This represents the liquid freshwater that is in the ground, surface waters (rivers & lakes), and water vapor in the atmosphere. So if the 5 gallon bucket represents all of the water on Earth, this half cup shows how much of that total (1%) is freshwater that is available to use.

Optional: Explain that not all of the ½ cup of water is clean and usable by humans (for consumption). Use an eye dropper to remove one drop of water from the ½ cup. This drop represents the amount of freshwater that is clean and available for humans to use.

5. The sources of freshwater

We have learned that living things need freshwater to survive, and that besides the freshwater that we need to drink, cook, and wash, humans use freshwater for growing the food that we eat, generating electricity (hydroelectric power), making just about anything that we buy and use from paper to clothing to cars (Isaiah, 2014).

We have also learned that only a small amount of Earth’s total water can be used by humans for these things.

Posted in Uncategorized | No Comments »

« FEET AND FLOAT: Exploring an animal adaptation for life in the snow
OBSERVING & PRESERVING SNOWFLAKES »