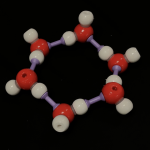 The target age range for this lesson is middle school and up. For an elementary-appropriate version, see “Water and Ice: Investigating density through melting and freezing.”

Part I (optional): Students investigate the difference in density between water and ice by observing the change in water level in a glass of ice water before and after the ice has melted.

Part II: Students investigate the molecular basis of the lower density of ice than of liquid water by constructing an ice crystal lattice structure out of candy and toothpicks.

● Teacher needs access to a water source for filling students’ cups. A pitcher may be helpful also.

● Teacher needs access to a freezer to make ice cubes.

*Other objects may be substituted as available.

Part I: Investigating differences in ice and liquid water density through observation

At least one day before the activity, make enough ice cubes so that there is at least one (up to two) ice cube per student. Aim to make the ice cubes as similar in size as possible.

You may pre-fill the cups with water before class or have students fill them (a pitcher or large water bottle may be helpful) in class.

2. Introduction to water and ice

The differences in the physical form of these substances and the ways that they function are related to their microscopic, molecular structure.

Pass out clear cups and fill about half-way with water, and add an ice cube or two to each.

Ask the students to notice where the ice cube is in the glass. Is it toward the top, or did it sink to the bottom? (Toward the top)

Ask them if they have any predictions about what will happen as/when the ice melts. Specifically, you can ask them if they think the water level in the cup will get higher or lower.

Using a different color marker than they used to mark the starting water level, have the students mark a horizontal line on the outside of the clear cup to indicate the ending water level after the ice has completely melted.

Ask students to share their observations. Everyone should have noticed that the ending water level was lower than the starting water level.

Were students surprised by the results? If they made a prediction ahead of time, did the results match their prediction?

What happened to cause the water level to go down? Which substance took up more space (had a greater volume): the ice cube, or the liquid that it melted into? (The ice cube)

Define/explain the concept of density. Density describes and measures how much material (matter) is in a given amount of space (volume).

H20 is different from most substances on Earth in that the solid form, ice, is less dense than the liquid form. This is because of the “lattice structure” that is formed by the arrangement of the bonds between the molecules.

Part II: The molecular structure of ice and water

6. Geometry of water molecules and hydrogen bonds in the ice lattice

Challenge the kids to build their own ice molecular lattice using gumdrops for Oxygen atoms, mini marshmallows for Hydrogen atoms, and toothpicks for Hydrogen bonds. (Other objects can be used as available.)

Use the Molymod model as an example. Coach students to identify which of their materials match which parts of the model.

Detailed instructions for making the candy & toothpick model need to be written/provided.

Key elements of the resulting structure are:

● In an individual H20 molecule, the angle formed by the two Hydrogen atoms is 104.45 degrees. For the purposes of the student-made models, the angle can be approximate as long as they support the structure.

● Tetrahedral shape of 4 Hydrogen atoms around each Oxygen atom, 2 H covalently bonded and 2 H hydrogen-bonded to each O, repeating structure

● Molecular basis of hexagonal symmetry will be visible: Ring of 6 H20 molecules that is “dimpled” or “folded” (Refer to model.)

● Discuss “real life” observations of what happens when liquid water freezes and expands and vice-versa. (E.g. polygonal patterns on the tundra form due to water that freezes in cracks in the ground and pushes the surrounding earth up. Pingos form when underground water freezes and expands, pushing the surrounding earth up. When frozen water in the soil – permafrost – thaws out, the liquid water takes up less space, so we get sinkholes and our buildings settle into the ground.)

● Discuss the consequences for life on Earth if solid water (ice) were more dense than the liquid form, as is true for most other substances. (E.g. rivers would freeze from the bottom up, and fish wouldn’t be able to overwinter; we couldn’t ice skate etc. until a pond or river was frozen solid throughout its whole depth)